Where Dictionary Definitions, Paradigm Shifts, and Microbiology Intersect: Use of the Term "Prokaryote."

A while back, I set my new microbiology students---my 24 new "micronauts"---to thinking about a somewhat controversial debate in my field:  the use of the term "prokaryote."  To non-microbiologists, this expression seems to stir up little trouble, but there is a tempest a-brewing in microbiology over those ten letters!

To most students, this is simple:  "prokaryotes lack membrane bound organelles and a nucleus."  Ahem.  It turns out that bacteria have plenty of internal compartments, some of them membrane bound.  And some unusual bacteria certainly appear to have a membrane bound region containing the DNA of the organism---a "proto-nucleus"?  So boundaries blur.

Adding to this definitional deresolution, over the past six or seven years there has been a growing clamor from some scientists to cease using the term "prokaryote" entirely.    There are several reasons for this, in the dissenters' opinion:

There are responses to those criticisms, of course, but there is a central "inconvenient truth" that we must face:  bacteria and archaea are very different from one another!  This paradigm shift was not helped in the 1980s, as those differences became more apparent, with the awful expression "archaebacteria."  Yuck.  Still, I was trained with the word "prokaryote;" all of my microbiology professors used the term.  I was aware of the changes, but they did not trouble me.  Like the White Queen in "Alice in Wonderland," I could believe six impossible things before breakfast---especially when it came to Matters Microbial!

One of the most influential "anti-prokaryotic" voices is that of Norm Pace, a truly one-of-a-kind scientist, whom I respect a great deal.  It was Dr. Pace who has persistently pursued the goal of overturning the use of the "P-word."  He is passionate and eloquent on the subject, to be sure.

For me, I have always been pulled in two directions.  First, the great Abigail Salyers (one of my two instructors at the deeply awesome Microbial Diversity Course at Woods Hole many years ago) introduced me to a wonderful expression, as illustrated below (I'm also fond of the motto, "Free the Organelles!"):


Yes, I have a CafePress site.  Sigh.  I don't make money from it, and have discovered that other people have taken these images and used them.  Which I suppose is fine, so long as they don't trademark them.

Anyway, I love the term "Prokaryotic Pride!," which earned me several earnest discussions with scientists sympathetic to the "Pace Camp."  This included Dr. Pace himself, who was nothing but pleasant and funny with me.

So when I teach Microbiology, I try to introduce this "debate" to my students as a technique to getting them thinking about how we define the microbial, and the eukaryotic.  More importantly---here I think Norm Pace and others would cheer---I try to emphasize (with a hat tip to the great Rodney Dangerfield) that the Domain Archaea does not get as much respect as it should!

Before the debate, I have my students read a packet of "position papers" from Norm Pace and other scientists.  Most recently in 2009, there was a fine "back and forth" debate (including rebuttals) between Norm Pace and Barney Whitman on this topic, in the pages of the Journal of Bacteriology:  here, here, here, and here.  In addition,  Dr. Pace wrote an "education-oriented" piece on the topic here.  So there is a lot for students like mine---who haven't had much exposure, if any, to microbiology---to mull over.

When the students got together in lab, I facilitated the discussion, and watched some minor sparks fly.  Some students thought it was much ado over nothing:  a nerdfight of sorts.  Others were deeply concerned about things that they had not heard in their earlier classes---a growing concern I have that students need more microbiology in general, earlier in their curriculum.  Remember that my Microbiology students are generally seniors!  They were fascinated by some of the ideas that Dr. Whitman and Dr. Pace batted back and forth.

In fact, I keep hoping that some enterprising student will make an "Xtranormal" video related to this topic, having cartoon versions of the two scientists debate the issue with humor.

Some students were "pro-Norm," while others didn't care if the term "prokaryote" continued to be used.  Me?  I'm conflicted.  I do think that the archaea are fundamentally different from the bacteria, and lumping them together could lead to a paradigm of "similarity" that could hamper understanding. Dr. Jonathan Eisen, for example, simply suggests we say "bacteria and archaea" rather than "prokaryotes."  Unwieldy?  Perhaps, but it does drive home the point that the two domains are very, very different from one another.

With my growing concerns about eukaryocentricity, oxycentricity, and colicentricity, I think it is pretty important to drive home to students the differences between bacteria and archaea (1st stop:  they aren't just extremophiles!).

Also, I wish that scientists would come together and develop a couple of model systems of archaea that students could begin working with early.  To be sure, there is some work of this nature with Halobium (though it never grows well for me), and Sulfolobus.  A couple of "shock and awe" experiments with archaeans would help remind students that the biosphere is composed of three basic branches!

As for my students, after the "debate," a couple of observations.  First is a "wordcloud" I made of their responses, when I asked them afterward what came to mind when I said "prokaryote." 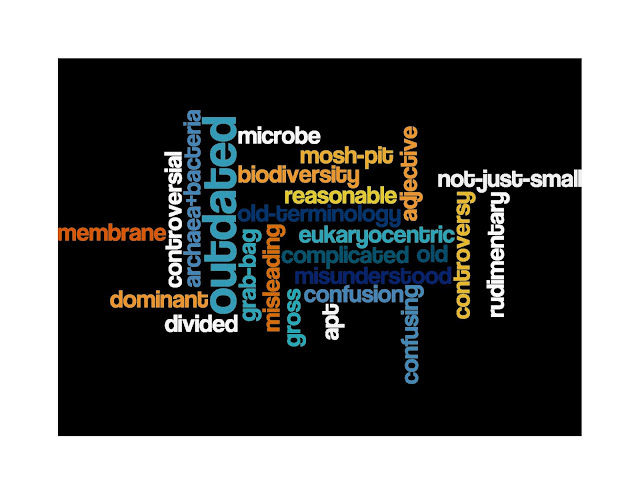 I can't really address "mosh-pit," but it is clear that students are getting ready to change the way they look at the Tree of Life.

Also, for fun, I gave them printouts of a photograph of Norm Pace.  Those in the "Pace Camp" in my class held them up like masks! 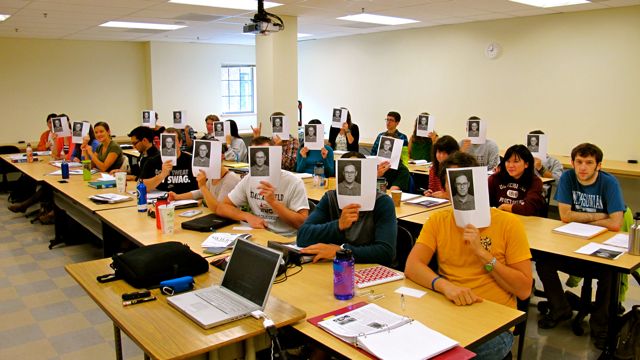 Slowly but surely, it seems that Norm Pace's philosophy is convincing students.  And I hope that has to do with their growing appreciation of the archaea!

In all, it was a good session for my students. They learned a lot...and through them, so did I.