Because we just had graduation here at the University of Puget Sound (even though I was out of state at the ASMCUE and ASM meetings), the idea of student potential and career choices has been much on my mind.  Especially as a I grade final exams of freshmen! 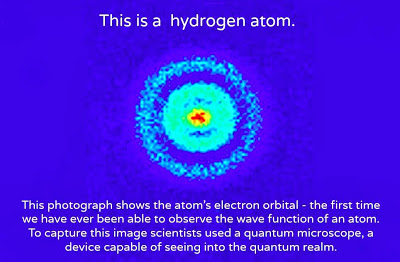 Thanks to advice from talented science artist and all around cool dude Glendon Mellow, I have been trying to chase down images and give them proper credit in blog posts and elsewhere (it makes sense:  I don't like it when people steal images from my CafePress site---it's insulting to the wonderful artist Kaitlin Reiss as well as yours truly).  It turns out the image was to be found here, with a nice explanation I suggest interested folks marvel at as they read.  The image of an atom itself, complete with wave function---a tiny periscope into the spooky quantum world!  Amazing!

This image reminded me of a wonderful essay by the late, great Richard Feynman (background information here and here).  Feynman's books, essays, and videos have long had quite an impact on me. 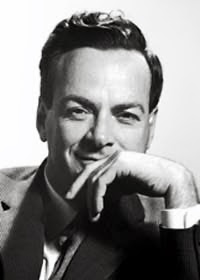 But first, a typically Feynman story, that actually happened to me as an undergraduate.  In the 1970s, when dinosaurs ruled the planet (according to my students), I was an undergraduate at UCLA.  I had always loved science, and the ideas of astrophysics enthralled me.  Even though I struggled with higher mathematics, I felt drawn to the field.

After winning his Nobel Prize in 1965, the always iconoclastic and unusual Feynman came to hate the adulation and attention he received.  So he would often give seminars "incognito," using an assumed name, to actually meet with real students instead of acolytes.  Thus, he came to UCLA to give a lecture on "The Structure of the Atom," but I had been clued in by a friend in the Physics Department:  it was Feynman, he of the "Feynman Lectures in Physics!"

Oh, such a lecture that day!  Feynman was exactly, precisely, as he was in the videos that many of you have seen, and that I adore:  theatrical, fast, irreverent, and full of fun.  Not at all stodgy or arrogant, though he was clearly brilliant beyond words.  Complicated things like quantum electrodynamics suddenly seemed straightforward, real, clearly correct as he paced the stage.  Feynman was a little younger at the time, but this video gives the best flavor of how he talked with undergraduates like myself.  The lesson in that particular video has stayed with me for a lot of years. If you haven't seen it, I recommend you watch it, and smile...as I always do when I see it.

And I got to talk with Feynman after his talk, Styrofoam coffee cup in my hand, untasted.  He looked at me, really looked, and for once I wasn't tongue tied in front of famous people.  Feynman was interested in what people thought.  Even me.  So I told him that I loved his lecture, but that I was sad, because though I could see the outlines of his ideas (such as his wonderful artistic manner of describing quantum electrodynamics), I didn't "speak the language" of mathematics.  And I was coming to the sad conclusion that I never would.  I was a blind man admiring a rainbow, or so it felt to me.

My wife is a mathematician, and doesn't believe me, but I strongly feel that "getting" higher mathematics is a knack, and that you must have the talent for it, like music or athletics.  And I could see the forest of what physics meant, but not the trees themselves, to mix my metaphors.

Feynman just smiled at my emotional outburst.  "Kiddo," he told me (and he talked just like that), "Don't sweat it.  Find what you love in science, and do that.  You'll know it when you see it."

Then he looked from side to side, that impish grin growing on his face, and back at me.  "Besides," he said, lowering his voice to a conspiratorial whisper, "Most physicists?  Putzes."

I didn't know any Yiddish, but I got his point. We both laughed, and he shook my hand.

And so I delved into biology in the coming years, and found my One True Professional Love:  the microbial world.  I believe what Feynman told me:  you have to have a passion for the science you do, and you will know it when you find it.  You can't help it.  You will burn to know more, to "get it," to tell everyone about it.  The New Age writer and pseudo-guru, Carlos Castaneda, called it "a path with heart."  And so it is, for me.  I knew, just knew, that microbiology was my calling.  Which is why I get called a microbial supremacist, I suppose.

Which brings us back to the photograph of the atom, above.

I have read a lot of books about Richard Feynman, because I admire much about his approach to science, and clear love of life.  Plus, he just makes me laugh.  But there is a book about him that means a great deal to me personally:  "Feynman's Rainbow:  the Creative Mind," by Leonard Mlodinow, written in 2003.  Mlodinow was a postdoctoral scholar in physics at Caltech toward the end of Feynman's life.  Mlodinow kept looking for wisdom from Feynman (and who can blame him?), even though his efforts sometimes appeared to irritate the scientist, then ill with cancer.  At the end of the book, Mlodinow talks with Feynman about how a person can know she or he are studying the right thing in science, both as a topic and as a career.

I have read the excerpt that follows to many people in my life, and handed out dozens of copies of the book to undergraduate students.  To me, it is like a lamp shining the way to, again, a "path with heart."   The passage summarizes how I feel about science and about life.  I know that my brother Jack Martin understands why this is so important to me.  I'm pretty sure that my friend Gregory Benford sees it clearly, since he is a physicist, too, and has known me for many years.  I hope that my wife Jennifer Quinn sees how this is at my center as a person.  And I pray that my sons learn the lessons contained.

I don't know if it actually happened the way that Mlodinow describes, but it is very reminescent of my own short conversation with Feynman so many years before.  Regardless, it hit me like a ton of bricks.  Mlodinow starts first, with Feynman replying.

"Look, if you're going to insist that I've taught you something, I guess I should give you a final exam."

"Go look at an electron microscope photograph of an atom, okay? Don't just glance at it. It is very important that you examine it very closely. Think about what it means."

"And then answer this question. Does it make your heart flutter?"

"Does it make my heart flutter?"

"Yes or no. It's a yes or no question. No equations allowed."

"Don't be dense. I don't need to know. You need to know. This exam is self-graded. And it's not the answer that counts, it's what you do with the information."

We locked eyes. His younger face flashed in my mind. The energetic, smiling bongo drum player I had seen pictured in the front of his book, The Feynman Lectures on Physics. A question popped from my lips.

"Do you have any regrets?" I said.

Feynman didn't snap back that it was none of my business. He didn't do anything for a moment. I wondered if he would open up about his frustration with quantum chromodynamics. But then his eyes welled up with tears.

"Sure," he said. "I regret that I might not live to see my daughter, Michelle, grow up."

That passage always makes me emotional on a number of levels.  Which brings me back to career choices for students.

It's easy for students to begin research projects like a job, instead of a calling.  But science is an unusual profession:  it's like a love affair with the universe.  Sometimes the universe loves you back.  Other times, it is unrequited love.  For me, I just knew...even if I am not at an RO1 institution with graduate students and postdocs.  So I teach undergraduates, and have a small research program with them.  There are many things I cannot do, but at the same time, many things I can.

And I know in my bones that it is the best, the only, job for me.  So I tell my students as they graduate, hoping they will find the same path I did, to a profession that they adore.

And Feynman was right:  ask yourself if what you plan to do for a career excites you.  If it makes your heart flutter.  Because, if it does, it is indeed a "path with heart."
Posted by Mark O. Martin at 6:05 PM