In class today, I introduced my students to the intellectual dangers of three flavors of "centrism."  For good or for ill, preconceived notions impact the way a scientist looks at a research question, which can in turn impede progress or even send a scientist down some incorrect paths.

For example, in the early days of genetics, everyone just knew that DNA could not possibly be the genetic material: it only had four types of subunits (nitrogenous bases)...adenine, guanine, thymine, or cytosine.  How then to explain the complexities of living things and the genetics thereof, given only four "code letters"?  So many scientists of that time (before Hershey and Chase, anyway) felt that proteins simply had to be the genetic material, because of their diversity, complexity, and subunit composition (twenty different types of amino acids).  It never occurred to scientists, at first, that genetic information could be read off a type of tape, so that the sequence of A, T, G, and C bases could comprise a genetic code. It took some "out of the box" thinking to move in that direction, and Francis Crick had a lot to do with it.

It even got to the point, I have heard, where scientists would posit that genes were made of "protease resistant proteins," held together with short DNA molecules---to explain the effects of protease versus nuclease on "transforming material."  Sigh.  William of Ockham would shudder.

Which brings us back to "centrisms" in microbiology.

Next, students are taught to be oxycentric.  High energy electrons are extracted from food, and delivered via NADH or FADH2 to oxygen as the terminal electron acceptor, using an easily memorized electron transport chain.  Except that the our microbial friends---the Small Masters---are incredibly more diverse in terms of sources of high energy electrons, diversity of respiratory chains, and their own terminal electron acceptors (consider the genius level respiratory abilities of Shewanella).

In addition, consider the amount of ATP generated from glycolysis, versus "full eukaryotic respiration":  2 net ATP versus about 34 ATP per glucose molecule.  Yet a microscopic examination of anerobic environments---rumen fluid, mud, etc---shows many types of organisms moving quite swiftly, engaged in hectic microbial business.  Anaerobic environments are not necessarily slow or static at all!  Oxycentrism gives us a false confidence that more ATP is always better?

Finally, even scientists aware of the first two traps can also think that all bacteria or archaea are organized and "act" like E. coli.  I call this academic sin colicentrism.  Operon organization, metabolic strategies, life histories---many microbiologists see the world through "E. coli colored glasses."  And it's not limited to E. coli.

Many years ago, I studied bioluminescence in bacteria.  Vibrio fischeri, a symbiont of squid and fish, organized its lux (light producing) genes in a compact manner---the regulatory gene divergently transcribed from the structural genes.  So when I began studying Vibrio harveyi, a bioluminescent bacterium that lives as a gut mutualist instead of in specialized symbiotic light organs in animals, my colleagues encouraged me to "sequence upstream" of the lux structural genes...because the regulatory gene or genes must be there.  I doubted that, wondering if the different life-histories of the two bacteria could result in different operon organization.

And I was correct.  Transposon mutagenesis showed the luxR gene in Vibrio harveyi at quite a distance from the luxCDABE structural genes.  Assumptions are dangerous; data is more fundamental.

As I told the students, it is important to always keep in mind the depth and breadth of the microbial world, the dizzying array of strategies and approaches to life histories, the readiness of change in terms of horizontal gene transfer and DNA rearrangements.

This is the reason that I would prefer to call my course "Microbial Diversity," rather than simply "Microbiology."  I remain in awe of my chosen field.
Posted by Mark O. Martin at 11:22 AM 2 comments:

August 27th was the first day of my latest Microbiology course, and I was excited and a little nervous.  I have been teaching undergraduates at small liberal arts institutions for about 16 years now, so I should not be nervous...but I was. Yet excited!  I truly do love teaching this course.

Here are my 24 young minds to bend to Microbial Supremacy! 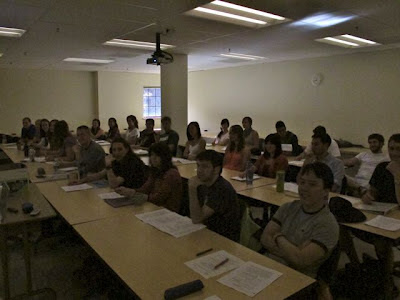 As usual, SO much to tell the students, and a limited time to do so.  Sigh.  So I try to focus on overarching themes and truly fascinating "new" developments in the field.  Think of a tree with many pretty branches?  I tend to be a bit (well, more than a bit) flamboyant when I teach, so I'm betting I will have to win some folks over a bit.

It was a short session:  I introduced the course, discussed requirements, and then gave the students a short multiple choice test to measure what they knew coming into my course.  That is intrinsically interesting, of course, but it is great to see them do much better at the end of the course; learning occurred!  I'm sure this class will be no different.

In any event, I gave them some microbially-themed candy to "sweeten" the test taking: 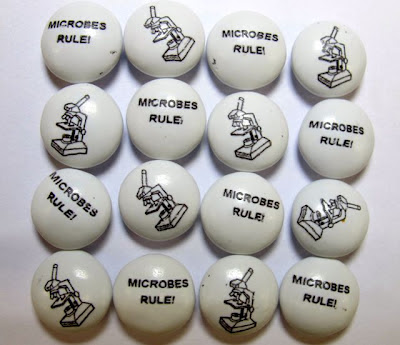 Kind of fun, and part of my master plan to propagandize my students into sharing my deep belief in Microbial Supremacy.  Besides, chocolate is made via microbial fermentation!

I did ask the students to describe some of the basic information they knew about microbiology.  I was delighted to learn that several students were aware that Taq polymerase, used in ubiquitous PCR, was made from Thermus aquaticus.  I went on to tell them that Thermus can be isolated not simply from hot springs at Yellowstone National Park, but also from hot water heaters!  Because I find the people involved in microbiology interesting, I reminded my captive audience that Thomas Brock isolated Thermus aquaticus from Yellowstone...with the help of an undergraduate student named Hudson Freeze.

"Hudson Freeze."  If that isn't a super villain's name, I don't know what is!  Dr. Freeze (there it goes again) is actually a nice fellow; I met him years ago in San Diego, where he did cancer research.

Discussion of moderate extremophiles like Thermus is useful in promoting an idea that is critical to me:  ecophysiology.  To me, this word relates the environment in which the organism lives to its biochemistry, ultrastructure, and genetics.  Thus, enzymes isolated from Thermus work best at elevated temperatures.  Later on, we will discuss temperature and membrane structure, and for similar reasons.  Darwin's dead Hand is always upon us!

All in all, it was a good day.  I enjoyed seeing the faces (so grown up compared to their university photographs online) associated with the names.  Having some nice discussions.  They seemed okay with my feelings about the primacy of the microbial, though I probably take it a bit too far: 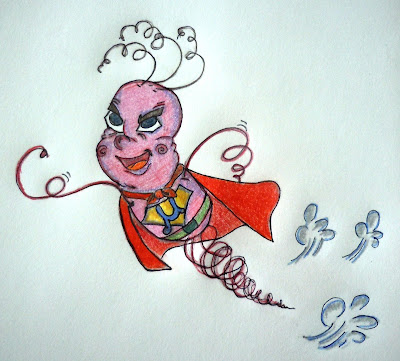 "Here I come to save the day!" yells Mighty Microbe!

(artwork by Alena Golubkova, a former Microbiology student of mine)

I look forward to lab this week, and getting deeper into microbiology!
Posted by Mark O. Martin at 12:58 AM 8 comments:

So I am finally starting a microbiologically-themed blog, after many years of reading and enjoying the blogs of many other talented people.  What do I have to offer?  Well, I have some things I would like to say about microbiology, and I would also like to chronicle my upcoming class in microbiology here at the University of Puget Sound.

First, an introduction.  I was born in Compton, California (yes, I am an OG) and raised in North Long Beach.  After graduating from David Starr Jordan High School, I attended UCLA, where I earned a B.A. in Biology.  After that, I went to Stanford University, and earned my Ph.D. in the laboratory of Dr. Sharon Long (my thesis work involved dicarboxylate transport in the plant symbiont Sinorhizobium meliloti, as well as developing a phage mediated generalized transduction system for that organism).

I then did two short postdocs in San Diego, one involving bacterial bioluminescence in Vibrio harveyi (with Dr. Michael Silverman) and one studying (to my microbial shame) Arabidopsis thaliana (with Dr. Nigel Crawford).  Following that, I worked for seven years as a research microbiologist for Kelco (then owned by Merck) in San Diego; it was interesting to try to optimize polymer production in Xanthomonas campestris and Sphingomonas elodea (their products are in Snackwell cookies and salad dressings!).

It was then (well, after I was laid off) that I made the jump back to academia, teaching at Occidental College in Los Angeles for eight years, and finally to the University of Puget Sound, where I am currently an Associate Professor of Biology.

Along the way, I met and married Dr. Jennifer J. Quinn, who is currently Associate Director for Arts and Sciences at the University of Washington, Tacoma (and also Professor of Mathematics).  We have two sons, my sensitive poet twelve year old Anson and my circus acrobat nine year old Zachary.  We live in the North End of Tacoma and love it.

Here at Puget Sound, I teach Microbiology to seniors and introductory cell and molecular biology (which we call "The Unity of Life") to freshmen.  I also have a small undergraduate based research lab, in which we study predatory bacteria (such as Bdellovibrio, Ensifer, and Saprospira) and mutualistic associations between bacteria and other organisms (lizards and crabs).  More about those topics, and teaching, in future posts.

What defines me?  Several years ago, during a faculty meeting, two colleagues were discussing what, if we received funding, kind of faculty hire should we make in the future.  As they were both botanists, they agreed that a botanist would be a good choices, since plants were the basis of the biosphere.

I said nothing.  One of my colleagues drew me into their conversation, remarking that I probably thought that bacteria were more important than plants.  I replied that plants did many interesting and cool things that they learned from bacteria and archaea.

My colleague grinned and called me a "microbial supremacist."  And I smiled right back and agreed.  The artwork below says it all!

It will be interesting to see where all this takes me---designing a blog, writing more regularly, thinking about microbiology and teaching.  Welcome to my blog, and I hope you find what I write interesting or even useful.  More to come!
Posted by Mark O. Martin at 11:43 AM 3 comments: