Biology 350 "Nanobiographies" by my Proud Micronauts!

One of the problems I face here at the University of Puget Sound is what I call the "N=1" issue.  There is only one microbiology class! 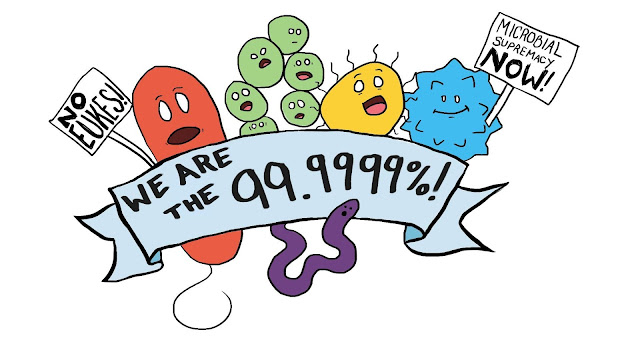 ----I still have to deal with the single course in microbiology we have available to our undergraduate students.  I do my best to turn them into enthusiastic micronauts in the one semester we have available.  Here is my current class of #Bio350 micronauts. 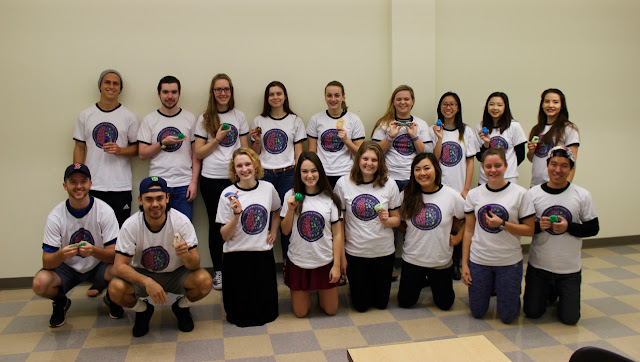 One way to do that is to give the students an opportunity to really delve deeply into a specific microbiological subject.  There is, after all, so much to microbiology overall (especially in a one semester course).

In my course, we don't call them term papers.  We call them "Microbiographies."  And as part of this assignment, I encourage my micronauts to create one page summaries of their topic, written for a non-science audience (such as nonscientist parents or friends in other majors).  Since these summaries are only one page long, it is natural that I call them "Nanobiographies"!

Please enjoy the Nanobiographies written by my hard working micronauts of Biology 350 in the Fall of 2016. 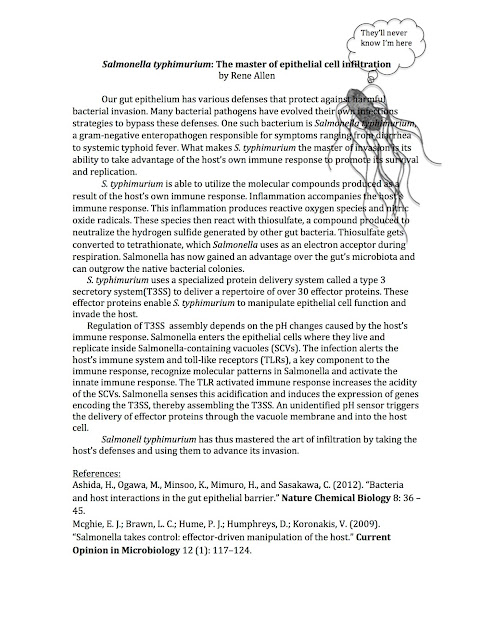 Carly became intrigued by the idea of using bacteria to fight cancer directly. 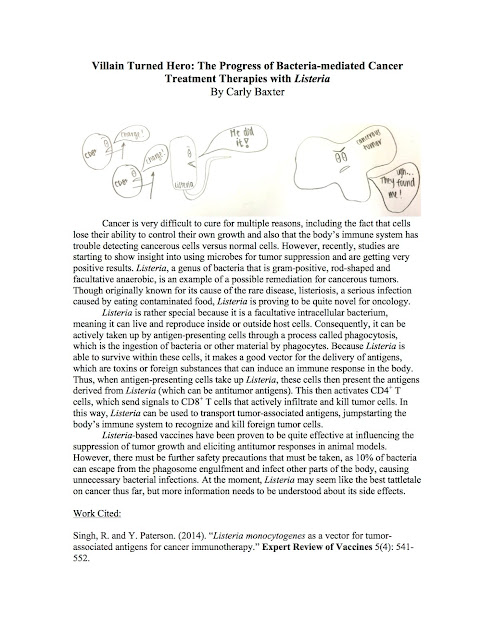 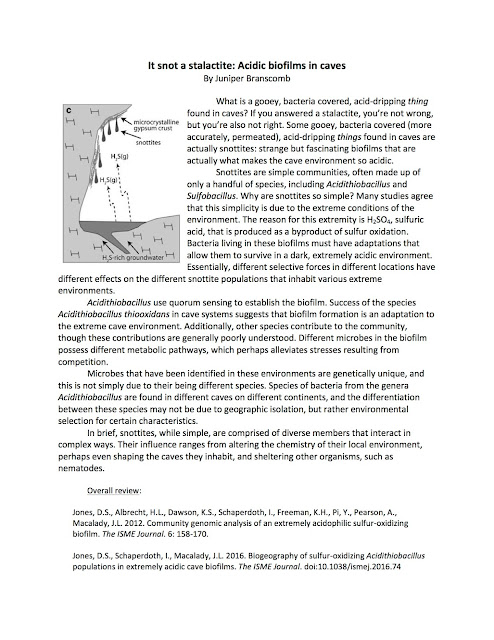 Austin, with his interest in dentistry, wrote about the OG of the cariogenic world, Streptococcus mutans. 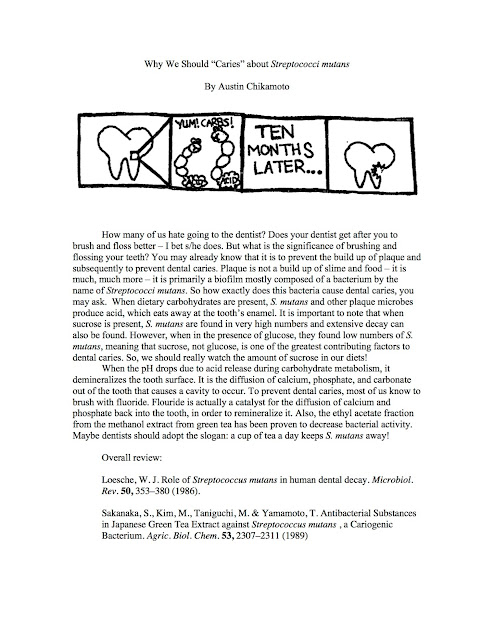 Mara quickly became entranced by the wonders of Wolbachia. 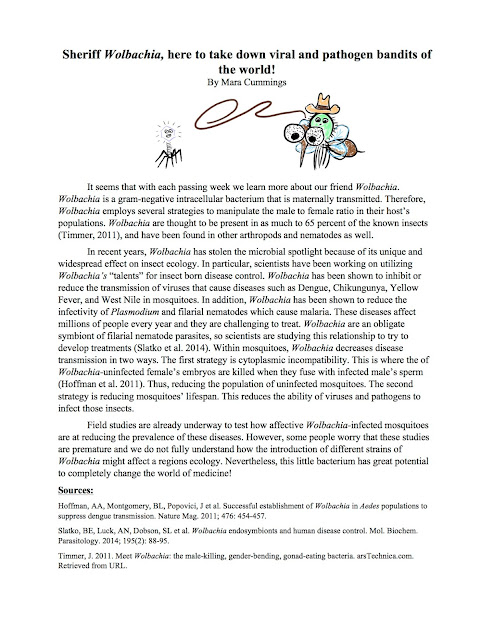 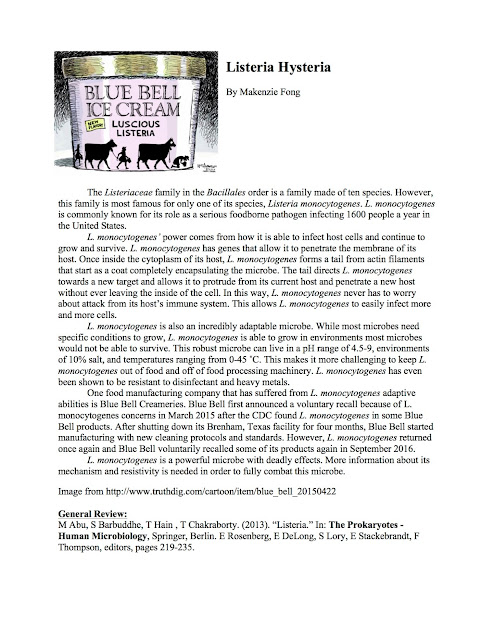 Jesse decided to shine a light on the archetypal squid-Vibrio symbiosis, with a bit of Harry Potter thrown in. 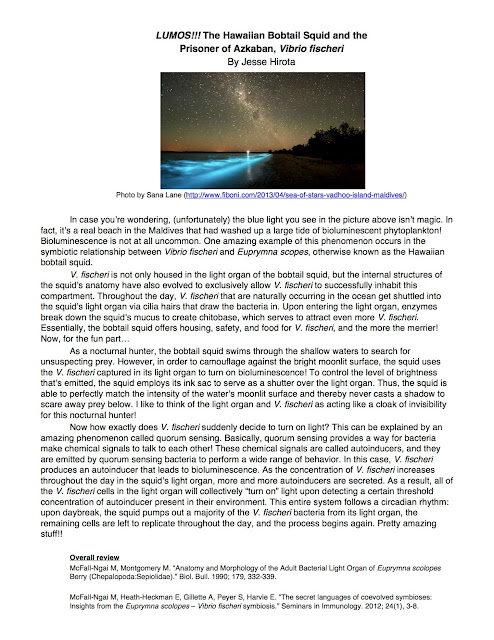 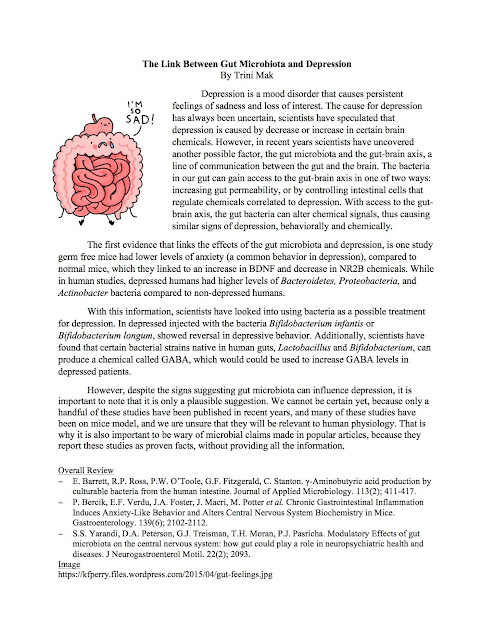 Molly wrote about the central issue of how we obtain our microbiota at birth. 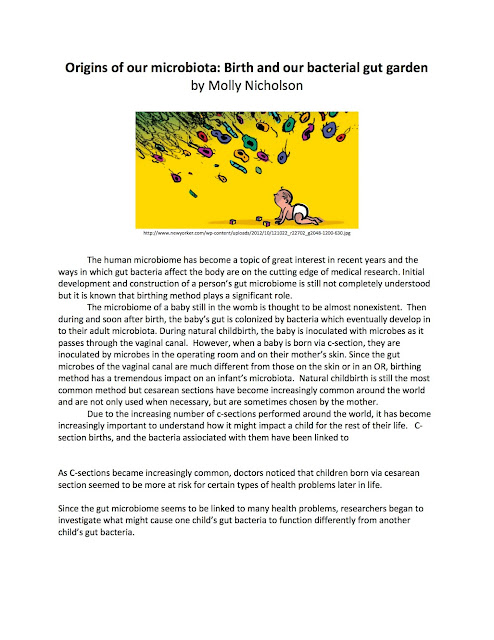 Emily, interested in life on other planets, decided to write about SLiMEs, which could easily be found on other worlds. 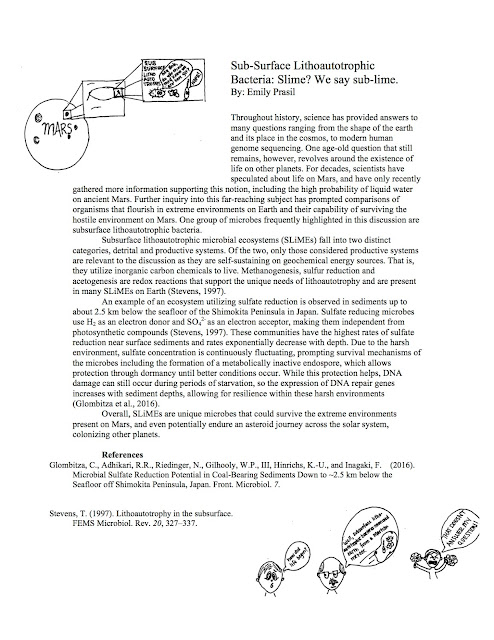 Kyle enjoyed writing about some microbes can generate electricity. 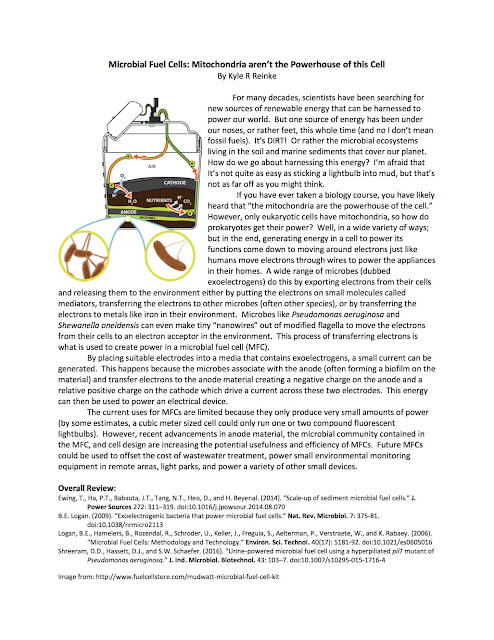 Anna, with her deep interest in marine biology, explored the relationship between microbes and coral. 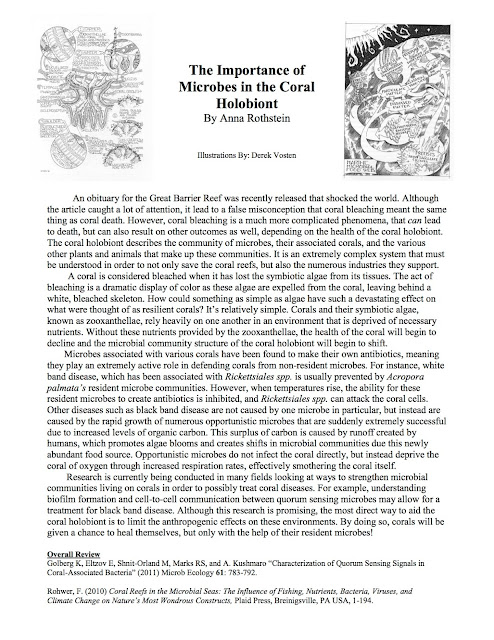 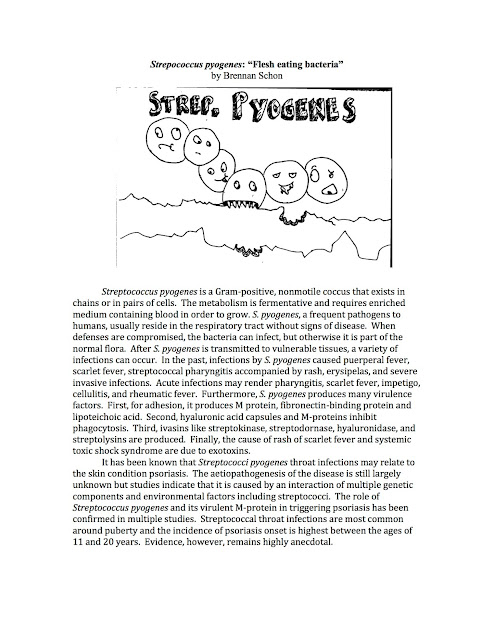 An avid swimmer, Anne wondered about what microbes could join us in the pool! 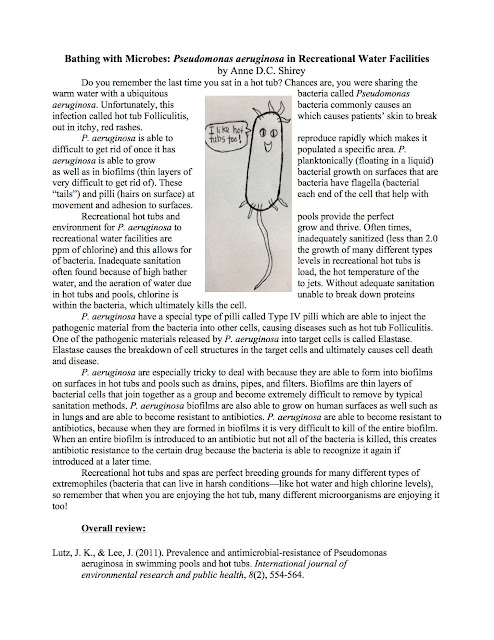 It's true that Josh went there:  fecal transplants.  No wonder "South Park" is involved. 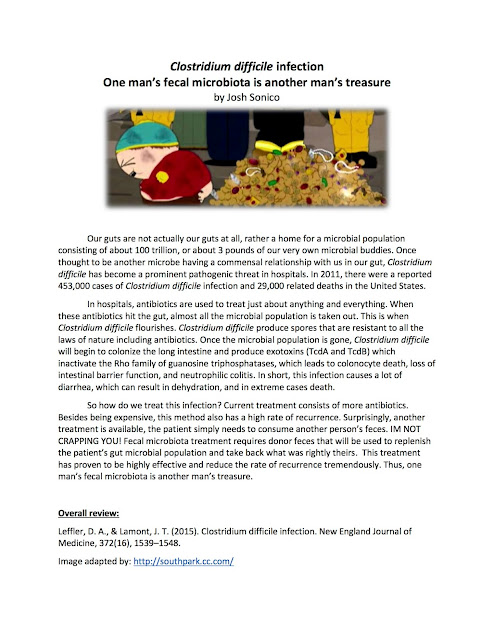 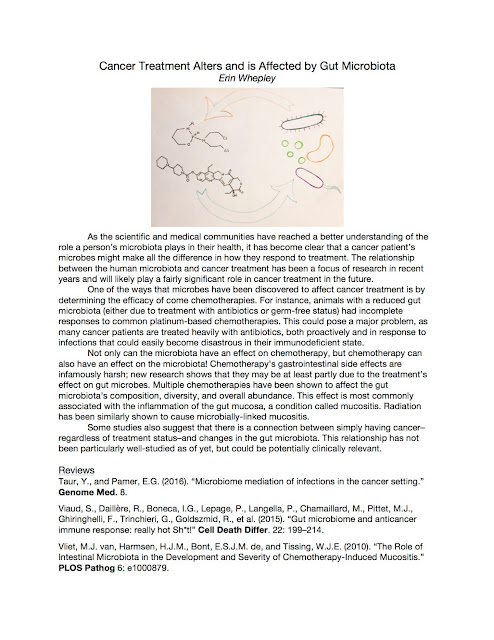 Cooper decided to delve into the scary world of MRSA. 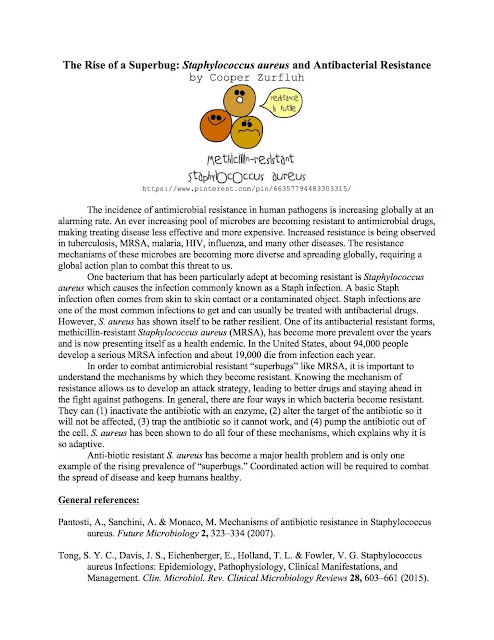 I find that when students select their own topics, there is more "ownership" of the assignment.  It certainly seems that way when I look over the interesting Nanobiographies written by my current crop of #Bio350 micronauts.

I hope you enjoyed their essays, as well.