There is a saying that “You can’t teach an old dog new tricks.”
So I am a bit of an unusual candidate for EDAMAME2015.

First, what is EDAMAME?  It isn't the pleasant soybean dish often served in Japanese restaurants.  Instead, the acronym stands for "Explorations in Data Analyses for Metagenomic Advances in Microbial Ecology."  It is a workshop for scientists, and one I very much wanted to attend.  The workshop, by the way, was funded in part by the generous folks at MoBio (who also provided course specific T-shirts).  This blog post appeared in a slightly different form on the MoBio website here.

I am an older associate professor in the Biology Department at theUniversity of Puget Sound, and can even remember biology prior to PCR! At the same time, I have been following the recent blossoming of research into communities of microbes over the years, ranging from hydrothermal vents, to insect guts, to acidic cave effluent, to the ever present human microbiome.  Sociomicrobiology seems to be everywhere in science today, and I find the topic fascinating.

As part of my job teaching microbiology (the only such course taught at my small liberal arts institution) at the University of Puget Sound, I began introducing students to the concept of what kinds of microbes appeared to live in their reusable water bottles several years ago---at first via simple streaking and observation, to colony PCR with universal 16S PCR primers and phylogeny, and finally a tentative foray into next generation sequencing: real complexity.  This brought home central concepts in microbiology to my students, as well as applications to everyday life.

At the same time, I began to explore microbiology-centered research collaborations with two of my colleagues at the University of Puget Sound.  The first involved sex-specific differences in the cloacal microbiota of a species of lizard in Southern Arizona.  The second involved fermentation-generated seeps of hydrogen sulfide rich seawater in nearby Commencement Bay, resulting in microbial communities similar to those found at deep sea hydrothermal vents.  In both cases, it was necessary for me to better understand changes in the structure of microbial communities.  It quickly became clear that I lacked the tools and training.

I had been struggling for a while with these studies, with occasional help from patient scientists such as Jack Gilbert at Argonne National Laboratory. Progress was slow and frustrating. So when the announcement of EDAMAME2015 appeared, I decided to apply, despite the fact that I am, um, a quite a bit older and less experienced than most folks taking the course.

It has been a wonderful experience.  The lead instructor, Ashley Shade, was patient, supportive, and funny. 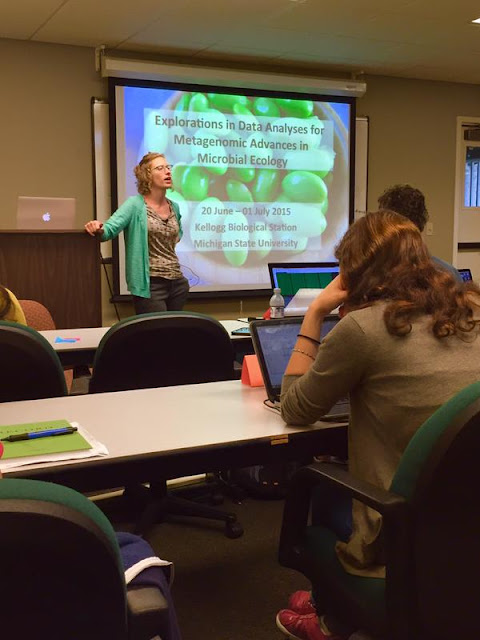 The talented and friendly teaching assistants never once rolled their eyes at me as I learned about line commands, "the shell," the eternal quandary of QIIME versus mothur, Prokka, MG-RAST, and the arcane secrets of GitHub. 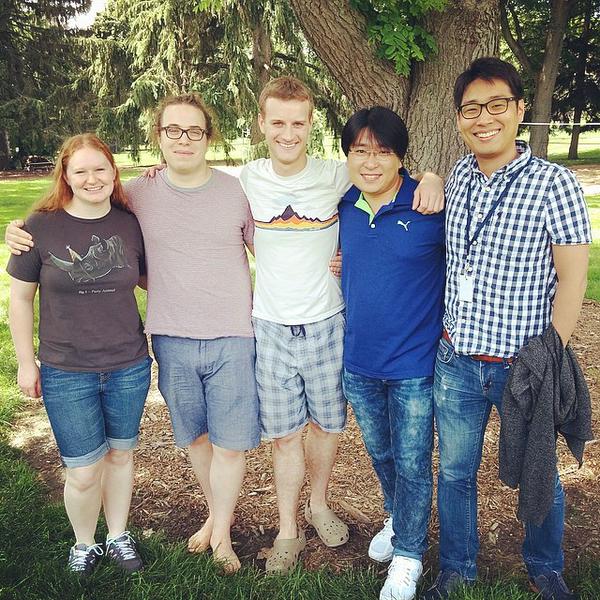 The instructors never gave up on me, even when I sputtered to an intellectual stop regarding R. The instructors, and my fellow students, pitched in and brought me up to speed.  It was truly an educational community.

I tweeted out lots of highs from EDAMAME2015, such as my victories over mothur.... 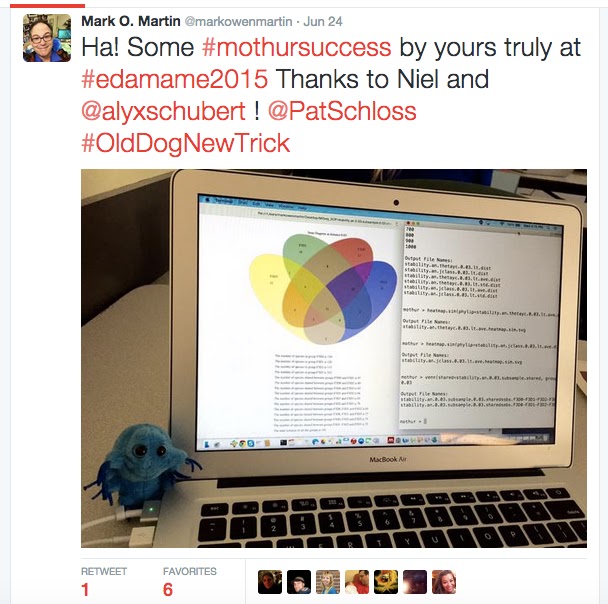 ...and short-lived triumph over R. 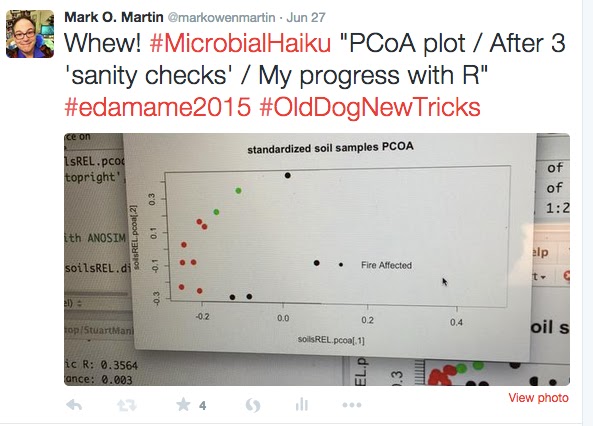 The tutorial materials and experiences have certainly clarified much of what I am doing back in Tacoma, and given me a great deal of insight into improved approaches!  I think that, because of this course, I can finally feel more “in control” of my collaborative projects.  Also, I am thinking of how I might use these skills in my Fall microbiology course, letting each student analyze the microbial communities within their water bottles (funding permitting, of course)!  (Art work by my good friend Kaitlin Reiss). 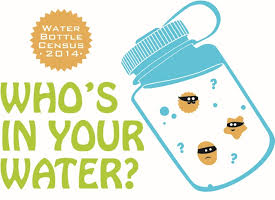 After a long day of tutorials and pecking at keyboards, we were treated to quite an impressive array of seminars showcasing expertise relevant to the skills we were trying to learn or hone. The speakers included Vince Young , Jay Lennon, Stuart Jones, Ariane Peralta, Jim Cole, Sarah Evans, and Jim Tiedje. We had the chance to chat and socialize a bit with each of the speakers; what an opportunity!

Far from Starbucks, I quickly learned to relax in the slightly jittery but stimulating arms of graduate school coffee (note the two phase states of coffee provided). 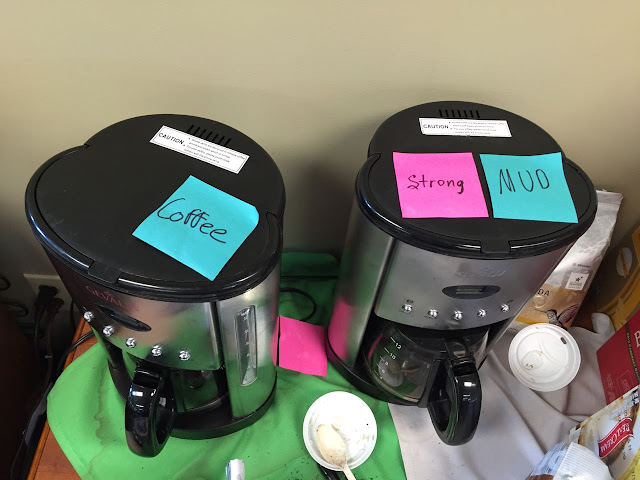 There were surprises, as well.  I brought some of my own "Microbial Supremacy" stickers, and many participants wanted them (I always try to preach the One True Microbial Gospel™ wherever I go). 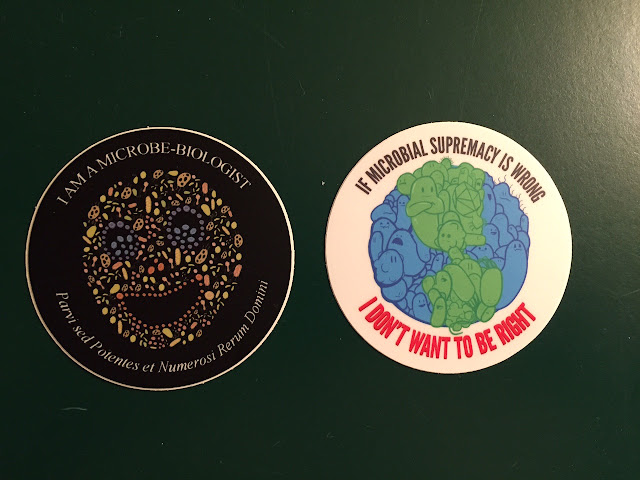 But I hadn't expected Pat Schloss to send along and distribute stickers for his bioinformatic program mothur.  The developers of another, similar, platform called QIIME, responded with stickers of their own.  Win-win from our perspectives! 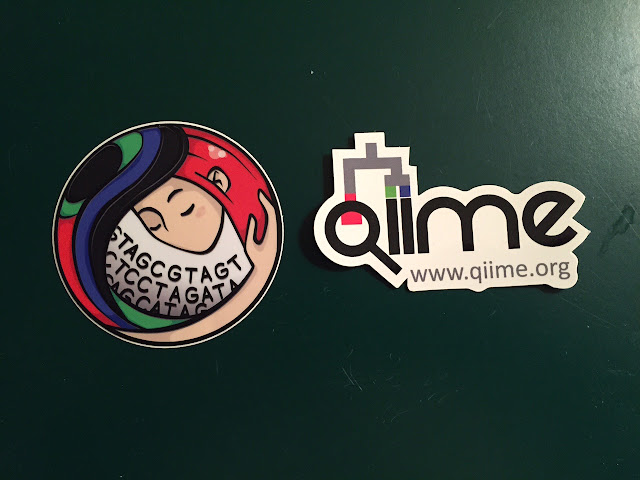 I haven’t mentioned the nonscientific aspects of EDAMAME2015.  The course was located at the Kellogg Biological Station near Kalmazoo, Michigan.  And as the photographs below show, it is a lovely locale for learning.

Here is the Carriage House, where we feverishly learned each day. 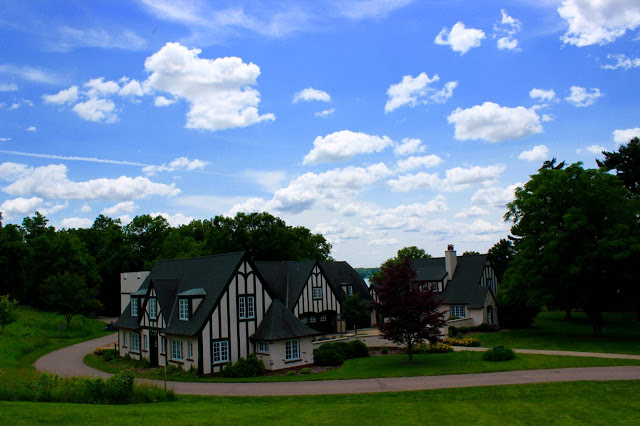 There were lovely sites throughout the Station property on Gull Lake. 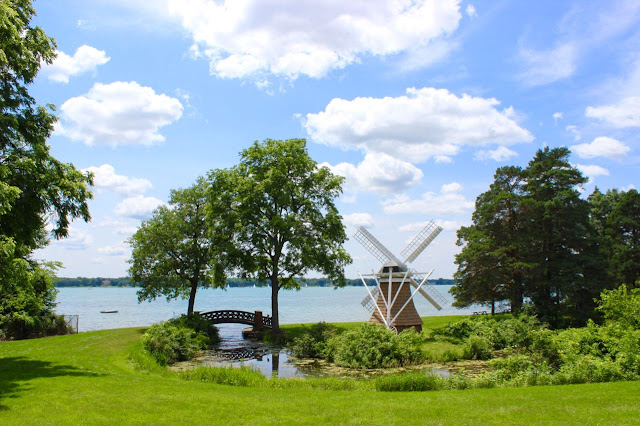 In addition, the weather was nearly perfect. 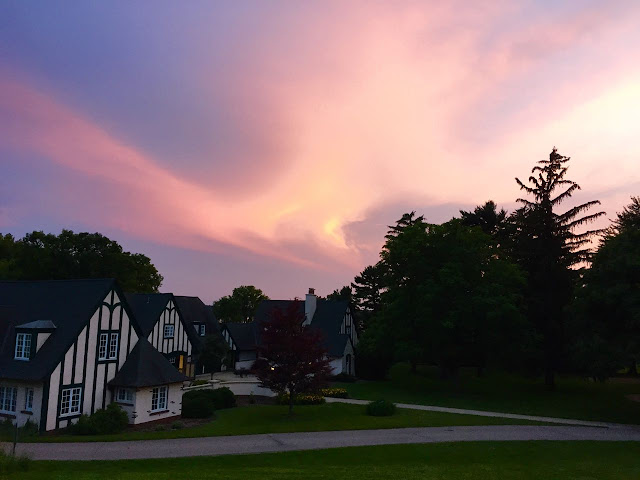 Did I mention the fireflies at night?

In addition, the students were diverse, warm, helpful, and welcoming. They enjoyed my tardigrade bottle opener..... 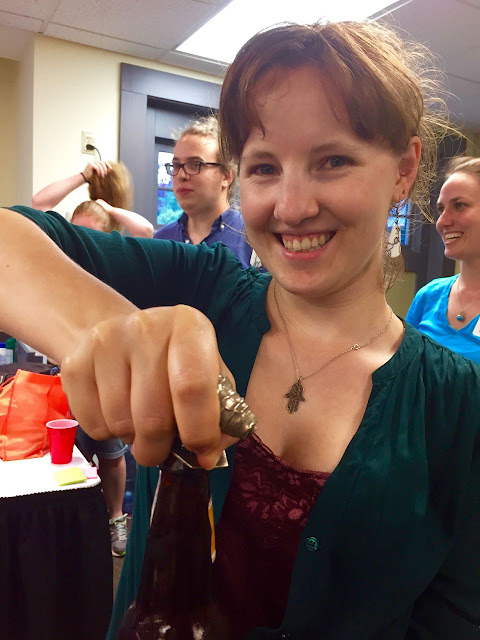 ....and even made me microbially themed origami. 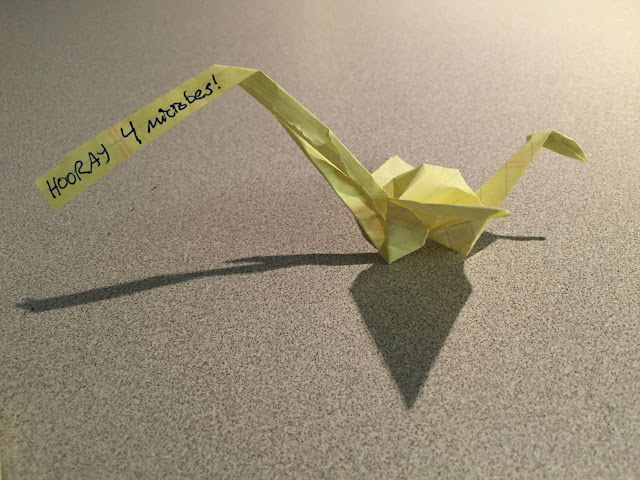 One night, we went on an expedition to a lovely brew pub in Kalamazoo. 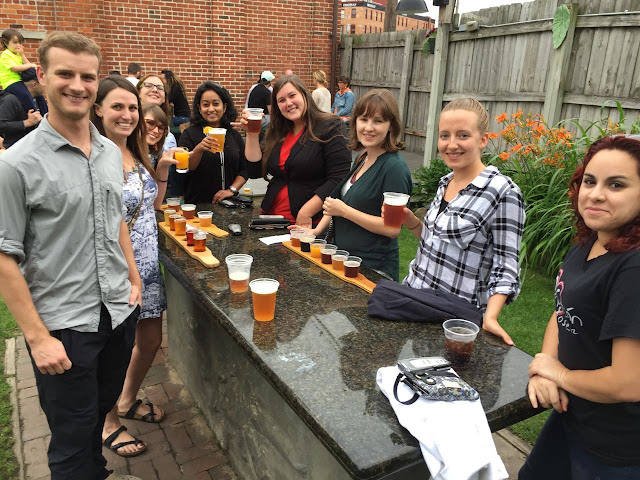 While on another night we enjoyed a great barbeque. 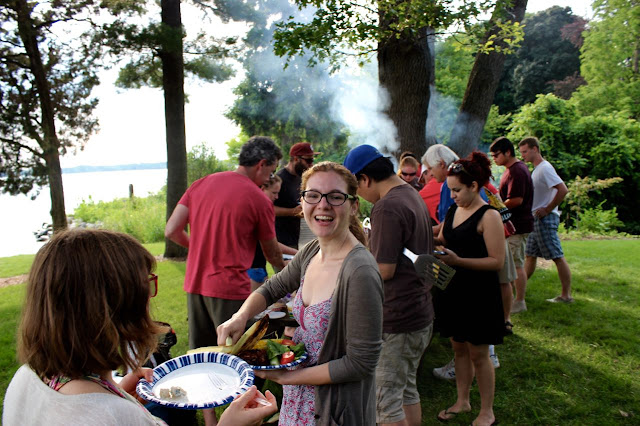 I believe that I have made some new friends and colleagues.
While I will be sad to see the end of EDAMAME2015 approach, I also know that I return to Tacoma armed with knowledge, skills, and a network of new colleagues who have already proved their willingness to help out people new to this area of research.

Yes, there is a saying that “you can’t teach an old dog new tricks.” In reply I would quote Henry Ford:  “Anyone who stops learning is old, whether 20 or 80.”  So I did my best, and came away with more knowledge than I expected.

EDAMAME2015 was just the place to remind this particular aged canid that I can still learn and grow as a scientist.  And where better than with such a crew as attended this June? 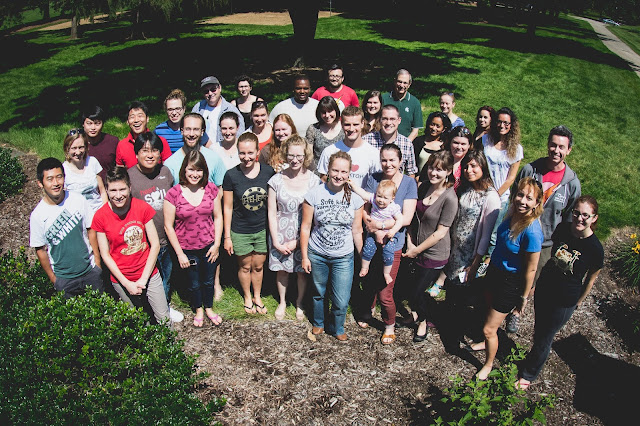 It is truly a transformative experience for people interested in microbial ecology, and I highly recommend it as an intensive, positive, and unforgettable experience.
Posted by Mark O. Martin at 4:32 AM