Happy Birthday to my Brother, Jack...

I have to say "happy birthday" to my big brother Jack, though I am sadly a couple of days late. Like the saying goes: time does not fly; it flees. Jack Sevard Martin, Jr's birthday is May 1st (which is amusing, as my brother has ever been the Cold Warrior). May 1st used to be celebrated with parades and tanks and missile launchers from the Eastern Bloc.

Now, we can celebrate my brother!

Growing up, I always doubted myself.  That was courtesy of my late and much missed mother's psychological Amishness; she was always so worried that her sons would be egotistical.  The result was that I am extremely uncomfortable with self-promotion of any form.  And my path through academia has not been, um,  simple and smooth.

My brother Jack never doubted me. Ever. Perhaps he projected his own hopes and dreams onto me, but that didn't matter. My brother never---not once---said anything to take me down a peg, and always thought better of me than the more mundane reality. This isn't all bad. I believe it encouraged me to rise above whatever I was doing, to try to do better. No matter the reverses or difficulties, my brother's belief in and support of me was constant and unyielding. To this day, I want to be the person Jack sees when he looks at me.

My brother also insisted I learn more than my teachers required in school. Much more. It was my brother who taught me history, not my teachers in elementary school, junior high school, or high school. My brother bought me Prescott's "The Conquest of Mexico" to teach me not just history, but how Americans in the 19th Century viewed history and the world. We went over the journals of Captain Cook and his expeditions together.  My brother had me read Orwell and Churchill and Sun-Tzu and Huxley.  And he discussed these works with me, often.

Let's not leave out his love of Gothic literature, ranging from Poe to H.P. Lovecraft; from Stephen King to Algernon Blackwood.  I still have the books he bought for me by these and other authors.

From my brother and his teaching, I learned about the bravery of Lincoln, the biting wit of Disraeli, and the perfidy of Wilson (seriously, look up Woodrow Wilson's record---I never heard any of that in school). From Jack, I learned about  Tamerlane and Genghis Khan and Shaka Zulu and William Wallace. My brother nurtured my interest in space and in science with books, discussion, and historical and political viewpoints.

He was teacher and brother and confidant. No one could ask for a better brother.  Jack is six years older than I am, but he was much more than my big brother.

This next bit says it all, though Jack claims not to remember it in his innate modesty.

I was 21 years old, a senior at UCLA, applying to graduate school. I didn't have a stellar GPA, and felt I couldn't get into a Big Name school. What would my brother know about that? He had been a political science/economics major, with a degree in law. Anyway, we went to dinner, and Jack asked me where I was applying to Ph.D. programs. I told him.

"What about Stanford or Harvard?" he asked me.

Jack steepled his fingers, sounding a bit like the character Niles from the old television show "Frasier."

"So you think you suck, right?" he asked.

"But if you are all that bad, what do you know about who they will accept or not?"

I hemmed, I hawed. I protested about the cost.

"Okay," he said, producing a checkbook. "How much?"

So with my pedestrian GPA, modest research background from Winston Salser's lab at UCLA, and an admittedly pretty good set of GRE scores, I applied to ten schools.  Jack insisted I apply to three "safety schools" where I felt I had a shot, three "next level" schools to aspire toward, and four "better than me" schools (where I felt I had little chance of being admitted).

I got into all them, and ended up choosing between Stanford and Yale. I will never forget the look of pride of my father's face when I showed him the list of acceptances, but I will also never forget my brother Jack's half-smug expression to me of "I told you so."

I owe all that to my brother Jack.

Whenever things were good, Jack celebrated with me. When things were bad, he supported me and helped me explore a way out of my difficulties. Jack never, ever gave up on me, and always believed in me. When he faced horrible reverses (the death of his much-missed wife Sonia, endless trouble at work), he never dumped on me. Jack was always most concerned about me. I honestly think that I have the better end of our relationship as brothers. And I'm not complaining.

I can talk with my brother Jack about anything.

I can never repay my brother for his love and support. But I can recognize him for those traits, and point out that anyone who wishes him ill will have to go through me...and I am not easy to push aside.  The world needs many Jack S. Martin, Jr.s. I would argue, in fact, that they need more of him than need more of me!

No one could have a better or more loyal friend. And I got to experience Jack as his little brother!  Here is a photograph taken of us together, in November of 2013, during his last visit. 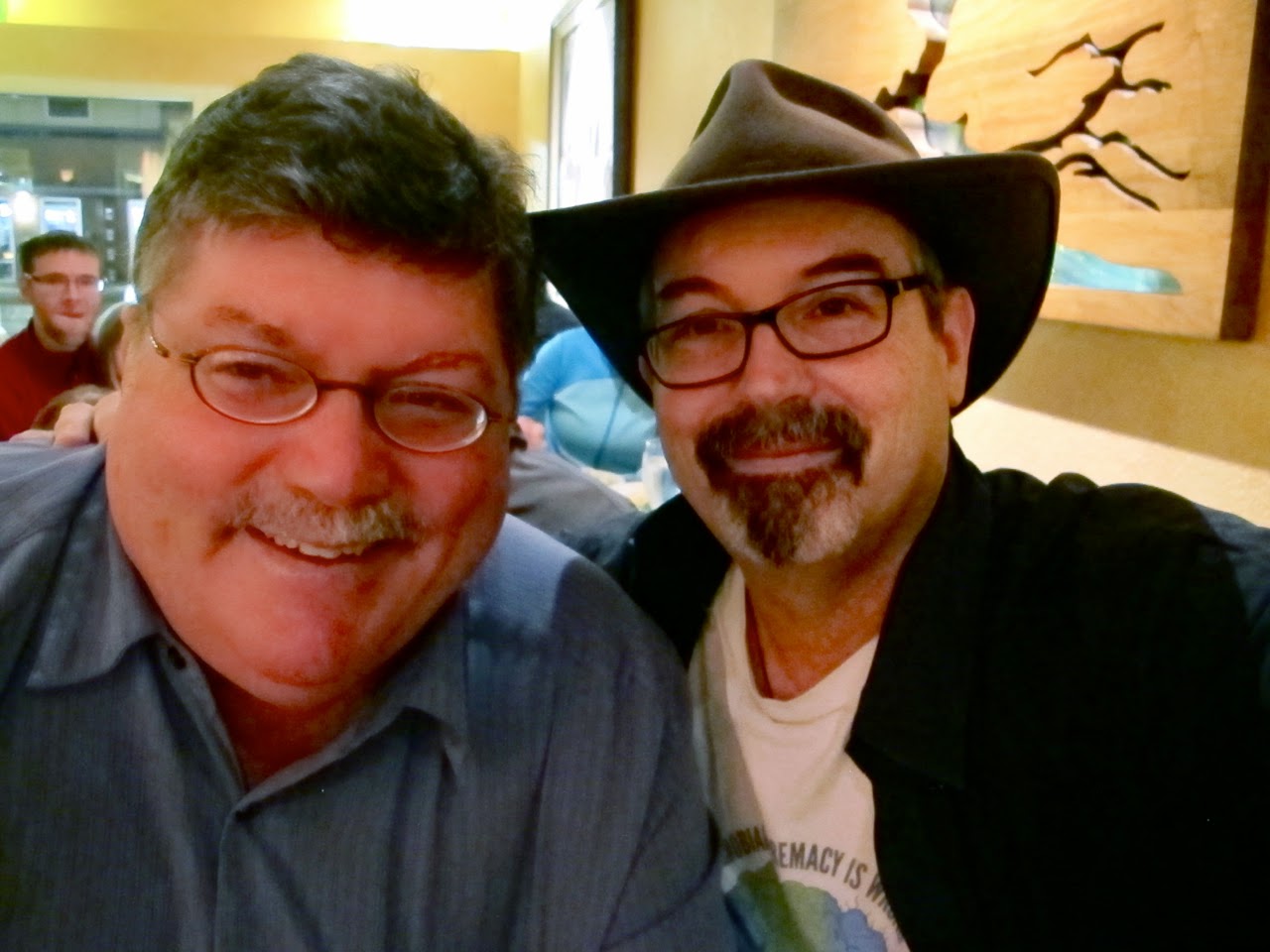