According to my teaching schedule here at the University of Puget Sound, Spring Semester is when I teach my "freshmen level" Biology 111 course.  Biology 111 is nicknamed "The Unity of Life," and that is the way I teach it:  just like Jacques Monod wrote, what is true for elephants is often true for E. coli.  Well, up to a point.  I do think it is important to remind students of the common strategies used by life on Earth, so the course title makes sense.

A couple of characteristics of the course stand as challenges to be overcome.  First, the class is large for a small liberal arts institution---48 students in lecture three days a week, split up into three lab sections of 16 that meet once a week (apologies to my colleagues at large institutions, but do keep in mind that I teach lecture and all the labs).  Anyway, the students get a fairly substantial dose of flamboyant Doc Martin, even though it is a "large" class. Here they are on the first day of class last week.  Fingers crossed that it is a fun class; so far so good.

The other challenge, of course, would be dealing with and overcoming the differing levels of preparation for this course.  We not only get folks interested in majoring in Biology, but also Psychology, Exercise Science, and even Business.  Some folks haven't had any chemistry at all since early high school, while others are quite savant on the latest in biology and biochemistry. Folks interested in, for example, human-centric biology may become frustrated by discussion of Matters Molecular™.  So I work hard to make things relevant to all the students, no matter the background, using everyday examples (the concept of structure and function in light of sugar substitutes is one topic I cover). It's definitely a moving target.  So I need to have a "snapshot" of how the new students perceive aspects of biology.

How best to evaluate "where" the students "are" coming into my classroom?  Why not use "word clouds"?  Word clouds are ways of representing "single word" answers to questions in a fairly artistic fashion, with the size of the word often representing its frequency.

On the second day of class, I said the word "germ" and asked the students to write down the first single word that popped into their heads.  Here are the results.

The first thing that leaps out at me from the response is how people conflate "germ" with "bacteria."  Fair enough, if not complete in a definitional sense.  But notice all the negative terms involving disease, "dirtiness," and the like.  My favorite from this word cloud would be "phobia" or "germophobe," because certainly people seem to have an anti-microbe phobia these days!

The term "germ" was popularized originally by Louis Pasteur.  But he didn't mean anything relating to disease with the word.  The original intent came up as part of his campaign against the concept of spontaneous generation. A "germ" meant "a bit of life," and with those lovely goose-necked flasks (and I admit I would like to own a replica!), Pasteur was able to convince people that life always came from life!  Unfortunately, the term "germ" is "meme-locked" as meaning something associated with disease.  I have vowed to change that.  Pathogens are like the juvenile delinquents of the microbial world:  small in number but they get ALL the press!

I then said the word "bacteria" and asked the knee-jerk one word response from the class.  Here is the word cloud that generated. 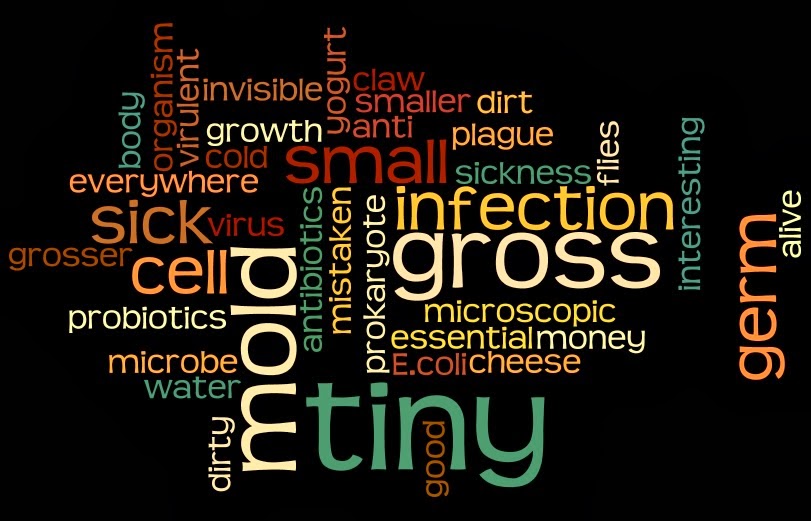 Again, notice the conflation of "bacteria" with "disease."  Sigh.  I have some work to do, as do secondary educators!  But amidst all the "dirt," "infection," and "gross" type responses, I had some interesting ones.  "Interesting" made me feel good.  "Tiny" is not always true, but is reasonable.  Some positive responses appeared:  "good," "probiotics," "yogurt," "cheese," and "antibiotics." There were also some odd ones:  "claw" I have no explanation for, nor "mistaken."  "virus" needs some clearing up, as does the seemingly popular "mold" (since bacteria are not fungi!).

It certainly gives me a great deal to think about in my introductory course, and hopefully some insights for middle and high school teachers.

I then moved on and asked the first "single word" response that appeared in their cerebral cortexes when I said the word "cell." 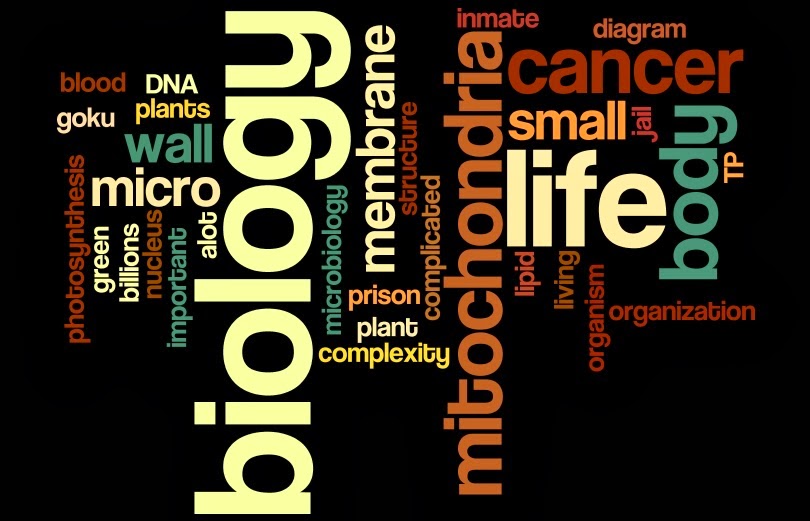 Well, it is good that "biology" came first (again, size of the word is related to the number of times it is seen in the responses).  But look at the other words:  "complicated," "cancer," "life", "small," and so forth.  Lots of comments refer to parts of cells, complexity, size, and so forth.  I cannot explain "goku," as I certainly hope that Dragonball is not part of cell biology!  Finally, some people thought of "cell" in a different context by writing "inmate" and "prison."  But I think we can agree that more people have appropriate thought-images of the word "cell" in their brains.

And finally, the same exercise when I said the word "DNA" to the class.  Now, it may well be that the best way to do this is not ALL on the same day! Regardless, here is their response. 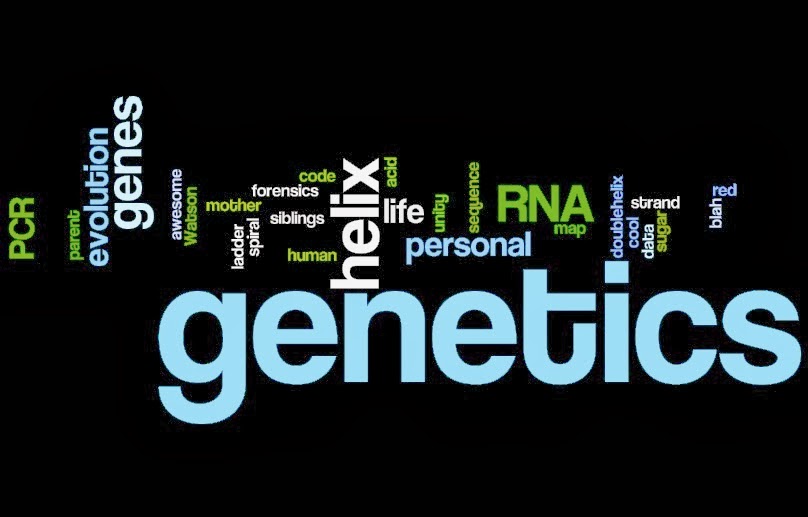 I found this to be VERY interesting, indeed.  What conclusions can we draw from this last word/concept cloud?

Well, "genetics" or "genes" appear to be the #1 answers, and this shows how the term "DNA" has been perceived in everyday life, I think. Most everyone else had a nearly equal spread of different terms, clearly originating from different sources.

Some students were keyed to procedural words like "PCR," "data," and "forensics."  A few students showed their enthusiasm with "awesome" and "cool." Others referred to structural words, such as "ladder," "spiral," "acid," "sequence," "doublehelix" (not really one word, but okay), "sugar," and "strand."  Still other students opted for concept driven response-words, like "evolution," "unity," "code," and the like.  "Watson" showed up, but no Crick, Franklin, or Wilkins (I will fix that).

There were some unusual choices, as well, since as "red" and "blah."  Blah?  Well, it is a response.

At the risk of sounding like a social scientist, the names that we give ideas and concepts can alter the way in which we think about those ideas and concepts.  So the "knee-jerk" responses to words can give a useful snapshot depicting HOW certain ideas are perceived by a classroom.  This in turn can impact our own teaching in response, to improve student learning and outcomes.

Why not give wordcloud-responses a try in your own classroom? In addition, thinking about this might give students some perspective into how they encounter and assimilate new ideas.