As October had not been the most upbeat month for me, personally, I was truly looking forward to my favorite holiday:  Hallowe'en.  Even better, it fell on Wednesday of last week, a lecture day for my Microbiology class!  So I began to plan...

People who know me well are very much aware of how much I adore Hallowe'en, as well as (of course) microbiology, being a proselytizing microbial supremacist and all.  Thus, it is no surprise that I have often tried to mix my two favorite topics.  Last year, my lovely and talented wife Jennifer Quinn carved me a "microscope" pumpkin to good effect.  When I say that I "married up," you now can see why.  But just wait. 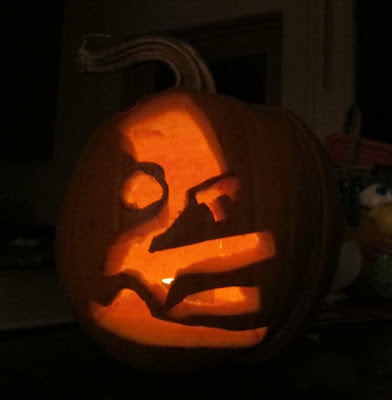 I even tinkered a bit with my camera, and Photobacterium leiognathi (a very bright strain called KNH1, isolated from Kane'ohe Bay in O'ahu, Hawai'i, by the great Ned Ruby and then-student Eric Stabb) to create this, um, unusual self-portrait last Hallowe'en... 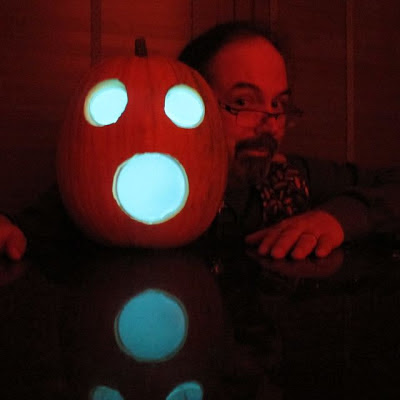 I carved Petri dish sized holes in the pumpkin, spread some Photobacterium leiognathi on supplemented nutrient medium, incubated the plates, inserted them into the pumpkin, took a timed exposure in my darkened kitchen at home, and voilá!

Thus, I wanted to make this year's Hallowe'en a bit special for many reasons, and also wanted it to involve microbiology.  Mission accomplished, as you shall see.

First, I offered my long-suffering Microbiology students extra credit if they actually dressed in some microbiologically relevant fashion in class on Hallowe'en.  These students are generally seniors, and haven't had any real exposure to the subject before my course...so I was curious where this would take them. Let's have a look, shall we? 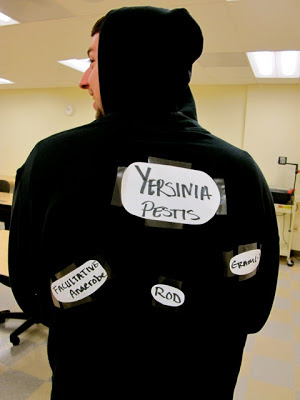 I appreciated the first student entry, who made his "identity" clear by both the color of his hoodie and helpful labels.  Yersinia pestis is an interesting organism, it is true! 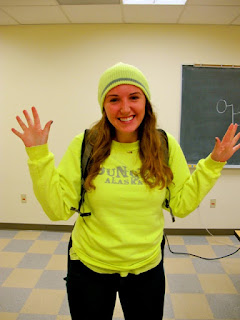 This student wore a "double duty" costume.  She informed me that she was green fluorescence protein (GFP).  At first I was a bit dubious of her choice, as GFP originated with a eukaryote...but I have certainly discussed GFP in class as part of gene fusion technology that helps us to understand gene regulation in bacteria.  Double duty?  It turns out her Biochemistry course also had a class meeting on Wednesday and the professor had asked the students to appear in relevant costume.  The infamous two-costume problem...solved! 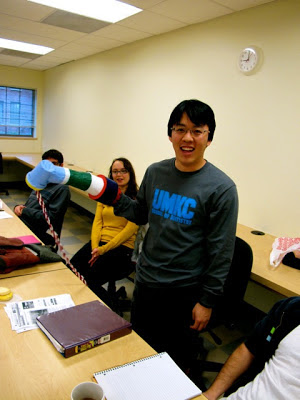 Other students were more interested in the intricate "mechanisms" behind microbes (and they are remarkable nanomachines, it increasingly appears).  Here a student has constructed and was wearing a model of the prokaryotic flagellum! At least it wasn't motorized, which could have been hazardous to nearby students, PMF or not! 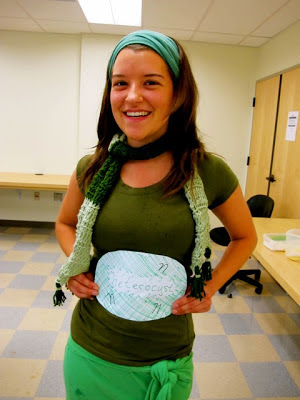 Here we have a student who became quite interested in the fascinating and vital cyanobacteria, and thus dressed the part, complete with nitrogen fixing heterocyst. 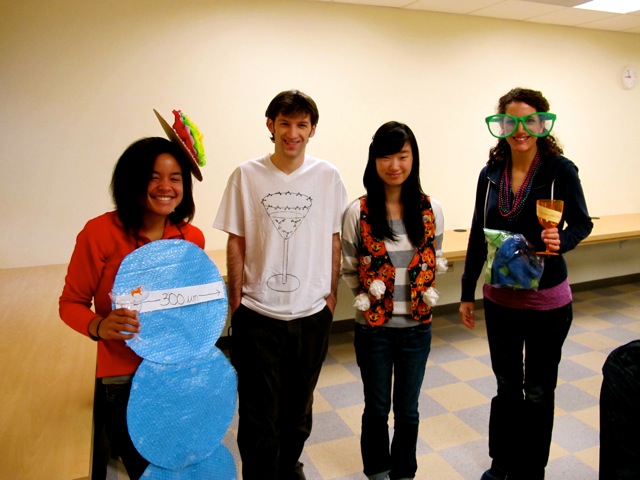 Earlier in the course, I spent some time discussing cellular size and microbes, since newcomers to microbiology assume that all microbes are...small. Not so!  One of the "giant microbes" we discussed was Thiomargarita, which is composed of a thin layer of cytoplasm over a huge nitrate filled vacuole (kind of "cheating" when it comes to the size issue, when you think about it).  Giant, filled with glittering bling-like sulfur granules, carrying its own terminal electron acceptor like a SCUBA tank, and being named in way reminscent of a refreshing adult beverage...what's not to love?  So the FOUR students above presented their own unique interpretations of Thiomargarita.  I was impressed! 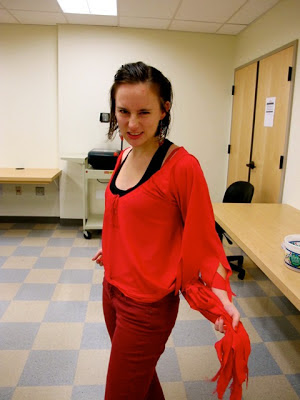 Archaea can have attitude, as well as a central role in our biosphere.  I try very hard to impress upon students the ubiquity and importance of this Domain of life.  At least this student, dressed as Pyrococcus furiosus (discovered by the inimitable Karl Stetter) was representin' that attitude of global relevance and control! 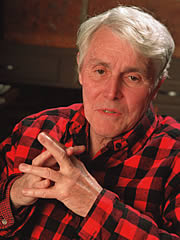 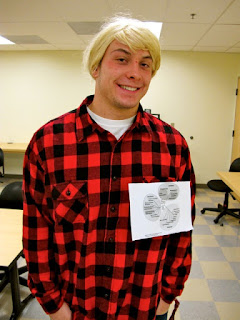 Then there were students who opted to dress as a microbiologist, rather than a microbe.  It was interesting to learn which microbiologist sparked their creative sides, costume-wise.  Here a student decided to dress up like one of my Microbial Heroes™, Carl Woese.   It's a decent likeness, as you can see (the student is on the left). 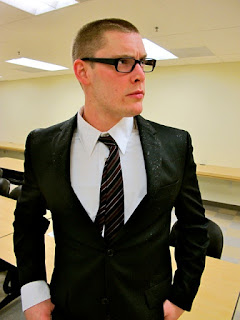 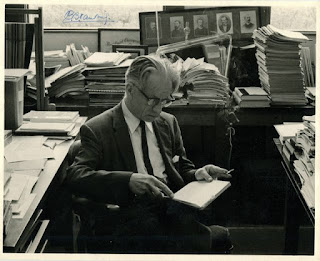 On the other hand, one of my other students went more formal, trying to "be" another Microbial Hero™ of mine, C.B. van Niel. I think he did pretty well. 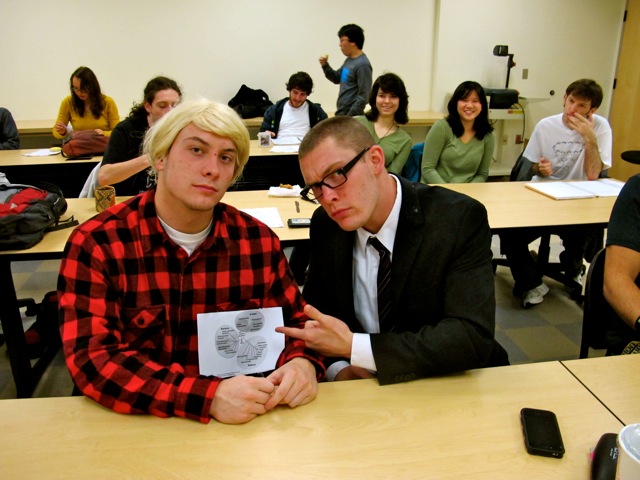 Here is a meeting I would have loved to have witnessed:  Carl Woese AND C.B. van Niel!  What did they talk about?  Or did they ever actually meet?

In addition, being Hallowe'en, three students brought cookies to class!  I didn't ask them to do so; they did it on their own (and I very much was touched by their love of matters microbial!).  The cookies on the right were student designed and beyond impressive (also tasty), but the cookies in the middle and on the left were inspired by this recipe, which is filled to the ever-loving meniscus by sheer microbiological awesomeness!

Then it was my turn, to bring some microbiological something-something to Hallowe'en in class on that special day.  And I was able to do so, courtesy of my artistic wife Jennifer Quinn, as I alluded above.  What we did was to look up various microbiologists, and then have Jenny "paint" their portraits onto appropriate nutrient agar plates. Incubate and then take a nice long exposure...and I think what we did was fun, and a bit artistic?  And it was fun to work with my wife on a project! 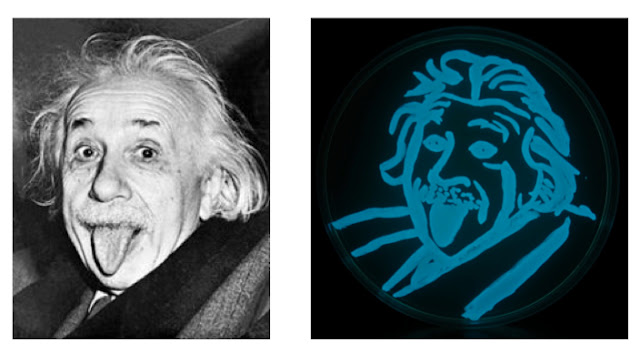 First, Jenny---being a mathematician (and sharing a birthday and Pi Day with the gentleman)---tried things out with Albert Einstein.  It worked out pretty well, I think.  The story of that particular photograph of the great man is to be found here. 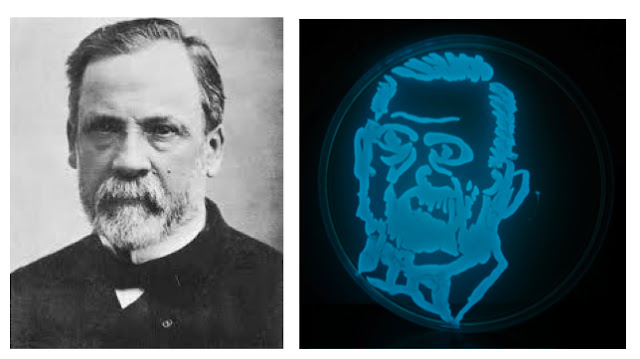 Then, of course, it was time to try out some Microbial Heroes™ of mine, from history and our current period.  The above was an attempt at the great Louis Pasteur.  The problem was that the plate slid a bit during the "painting."  But that's okay:  it has a "Zombie Pasteur" vibe that I actually like (and Jenny did spend some time "painting" Edgar Allen Poe portraits using luminous bacteria with great and spooky success!). 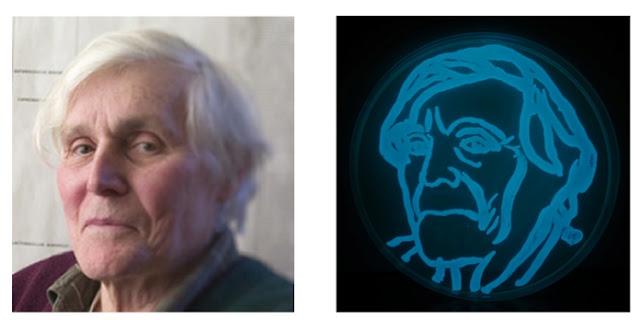 Carl Woese is one of the names I need all of my students to remember. He is the architect of the great Tree of Life, and "discoverer" of the Domain Archaea.  Historically, he never gave up, and fought a scientific "good fight" until the paradigm shifted in his favor (as in the Microbe World video linked above).  So why not put his names up in light, to honor him, so to speak?  It's actually not easy to paint on these Petri dishes, since the bacterial culture doesn't have color to it (different from the solid medium).  Still, I think it is a decent likeness! 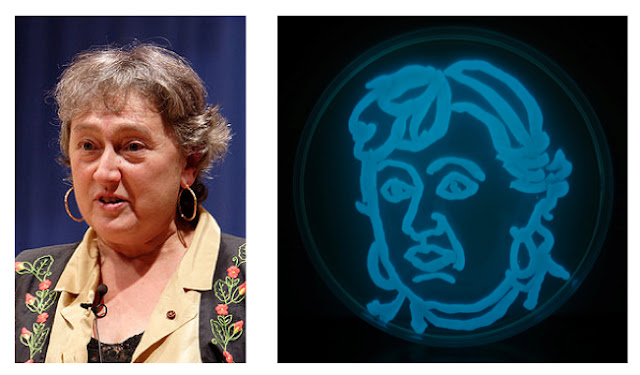 Another Microbial Hero™ of mine is the late Lynn Margulis.  Opinionated, fearless, and indefatigable, this dynamic scientist pushed the paradigm shift that chloroplast and mitochondria were once bacteria, even before molecular 16s rRNA data became available---now respected and taught as the endosymbiotic theory of cellular evolution.  I once spoke with her on the telephone (about predatory microbes) and told her that I felt that cyanobacteria and bacteria had been cruelly enslaved by primitive eukaryotes billions of years ago.  "Now you've got it," she exclaimed in reply.  To be sure, she was complex, but unforgettable. 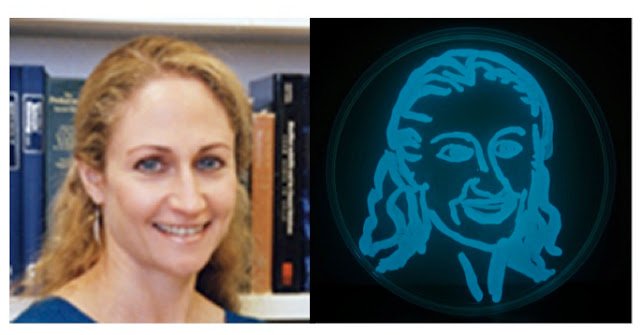 One of the things I most enjoy about microbiology is that even famous microbiologists will speak with enthusiasm to folks like myself, who are more educators than bench scientists.  Thus, I have gotten to know the very impressive Jo Handelsman over the years.  Jo coined the term "metagenomics," the method of studying all of the DNA in an environmental sample, regardless of its origin.  She is tireless in her championing (by example) of mentorship and advancing education in microbiology (and in general), especially for women and underrepresented groups.  She brings out the best in people, and by example.  I hope she likes this portrait! 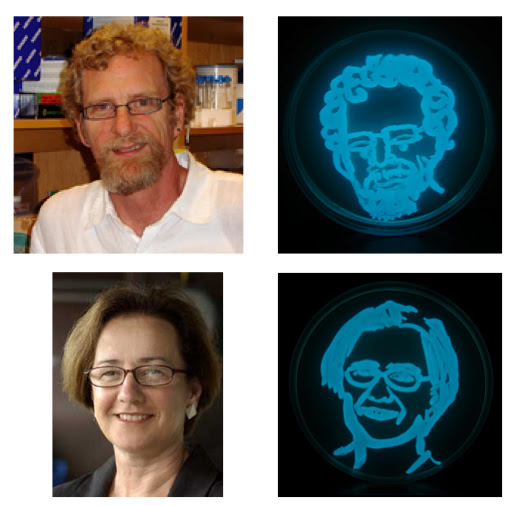 Over twenty five years ago, when I decided to leave the biotech industry (actually, I didn't "decide;" I had been laid off), and wanted to return to academia and the teaching of undergraduates, I needed a new research system to introduce to those undergraduate students.  Thus I returned to Bdellovibrio, first introduced to me as a sophomore by the late Syd Rittenberg at UCLA.  A former student of Syd's, Ned Ruby, worked a bit with Bdellovibrio. He was moving away from that system, and into a fascinating symbiosis between bioluminescent Vibrio fischeri and the Hawai'ian Bobtail Squid, Euprymna scolopes.  Ned brought me up to speed on working with the often-cantankerous and recalcitrant Bdellovibrio, and thus I made a new friend and colleague.

Over the years, Ned Ruby and his long time partner, Margaret McFall-Ngai, have carefully dissected their wonderful squid-vibrio symbiotic system to great acclaim.  Ned works with the bacterial part of the mutualistic association, while Margaret works with the eukaryotic side.  Both of them have learned a great deal about both sides of the scientific equation---and science has greatly benefitted as a result.  Just as the squid and vibrio are interactive, so are the scientists involved!  Ned's deep understanding of bacterial genetics is a valuable resource to many, and Margaret's "conversion" to microbial supremacy (more accurately, the vital role that microbes play in animals and plants) has been an inspiration to me.

My wife and I have thus known Ned and Margaret for many years, so a portrait of them seemed like a great idea.  I hope they like it!

Finally, my wife created a special "surprise" for me---I certainly didn't ask her to create this last bit of "art."  She took a photograph that was taken of me while we were in New Zealand last Spring (at the hot springs of Rotorua), and turned it into a bioluminescent portrait of me.

Perhaps this last is the "trick" of the microbial "trick or treat" I brought to class that day!

In all, a wonderful and enjoyable (and microbial) Hallowe'en!  Onward and upwards!
Posted by Mark O. Martin at 2:54 PM